Our department has been studying cements and mortars from the 19th and 20th centuries since the 1990s, tracing the development of cement from its invention through the centuries, when production on a large scale and wide distribution throughout Europe and even overseas became possible. We’ve gained exciting insights into the history of early industrialization.

Even the smallest sample from a façade or sculpture contains a lot of information about the cement raw material, the type of kiln, the firing conditions, the grinding and the processing into mortar. Naturally, since the end of the 18th century, when cements were first produced, the technical conditions in industrial cement production have changed constantly with accompanying changes in the properties of the mortar in question. This is, in turn, of great importance for restoration, which has to take account of the original materials used when considering a replacement of repair mortar. Thus, the investigation and characterization of historical cement mortars from a materials science perspective does not only further our knowledge of industrial history, but also greatly assists with the restoration of sculpture and architecture.

The numerous varieties of historical cements can be divided into two distinct groups: Natural cements and Portland cements. The differences between the two are profound, both in terms of production and technical properties. Therefore, their differentiation in a specific sample is an important part of the mortar characterisation. Chemical methods are less suitable than light and electron microscopic methods, which is very much in line with the equipment and scientific core competence of our department. For this reason, we were able to establish ourselves as a competence center for the materials science investigation of cement-based historical building materials. In this context the constant cooperation and exchange of experience with the Natural Science Laboratory of the Federal Office for Monument Preservation in the person of Dr. Farkas Pintér is and always has been of great significance.

Our department has been involved in several international research projects on the subject of natural cement, which in many places is also referred to by one of its trade names: Roman cement. These projects are part of a continuing discussion on this subject to date. In a way, we were among those who "rediscovered" Roman cement as an important façade construction material of the Gründerzeit (the period of the mid-19th century in Central Europe); beyond advancement of the knowledge of building materials and binder chemistry, the projects were vital to help preserve historical monuments that used this material. We recommend interested parties to visit the website of the EU research project ROCARE. 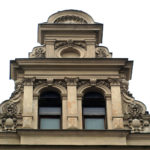 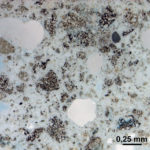 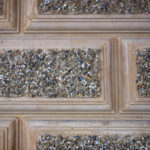 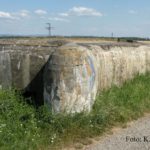 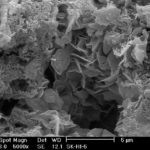 Hydrate phases in the binder of a historic roman cement under SEM ©N. Mayr